“When is it okay to wear sneakers with a suit?” – @gene_kansas, via Instagram

That is a fantastic question, especially since we're living in a time where pretty much anything goes… until it doesn't.

In general, we think about dressing as a form of manners – making an effort when getting dressed shows respect to those you're with. So the very first thing I would think about is the host, or company I'm in. What is their style? Are they more conservative or more out-there? Consider their style as you put together your outfit. You'll want to make an effort, but don't want to out-dress your host either.

Second, I'd think about the environment, and both location and season. Am I in the city? West coast or east coast? (For instance, LA is significantly more dressed-down than, say, Philadelphia.) Or am I at the beach or in the desert or in the low country? What's the climate? What's the season? Warmer weather sort of begs for a more casual decorum in general, so that helps your chances in pulling off a suit with sneakers.

Lastly, I'd think about occasion. If the word "formal" is in there, this is probably not the time. And if it's at the opposite end of the spectrum, a pool party or kid's birthday (or shoot, a kid's birthday party at a pool), you might not want to be the only guy there in a suit. But this means most occasions between informal and jacket-optional are totally appropriate… which means there are a LOT of examples… travel, commutes, backyard gatherings, cocktail hours, dinners, colorful parties (holiday! costume! birthdays!), visits to country or yacht clubs, even informal or beach weddings.

Assuming this all checks out… you're in the go-zone. So how do you do it? I don't wear sneakers with a suit very often but when I do, I follow 3 simple rules.

1. The shoes should have the correct shape. Since you're wearing dress trousers, you'll want sneakers that have design similarities to a dress shoe. We like a clean silhouette, like the way we like our jackets with a natural shoulder and minimal break in our trousers. I like those that take inspiration from vintage tennis shoes with simple, clean lines – think Tretorns, Adidas Stan Smiths, Diadoras. A more streamlined, cleaner silhouette works better with a suit, so probably not something with torqued up soles. And all of these have a range of options. I'd add that slip-ons or wholecut lace-ups are also great, especially when they're leather or suede.

2. Keep the color(s) neutral-ish. Going with sneakers is already a bit of a rebel move, so dialing it back refines the look ever so slightly. For example, an air force blue suit with Tretorn Nylites in white and navy, a flax color sharkskin suit with Diadora Game L Low sneakers in green & white, a seersucker suit with white on white sneakers, or a navy high twist suit with our own navy suede chelsea (sneaker) high tops.

3. Make sure your shoes are clean. This might be stating the obvious, but don't undervalue its importance. Not just clear of dirt or stains or general wear, but clean in terms of appearance. The stark contrast of bright white can be distracting, so they don't need to look like you just bought them or anything, but you'll want them crisp, especially the laces. This is a key to pulling it off… you lose the look if you're wearing shoes that are dirty or a little too worn in.

Maybe not a rule, but as a general north star, I would consider "does it feel like you?" It's certainly a look, and not all of us can be John Lennon on Abbey Road, or Is This It-era Albert Hammond Jr. If it's not your bag – that's okay, too. Feeling like you are clothed and in your right mind – no matter what shoes you're wearing – will make you more productive, confident, and content.

Hope this helps. You might have inspired me to break out the sneakers a little more often…. 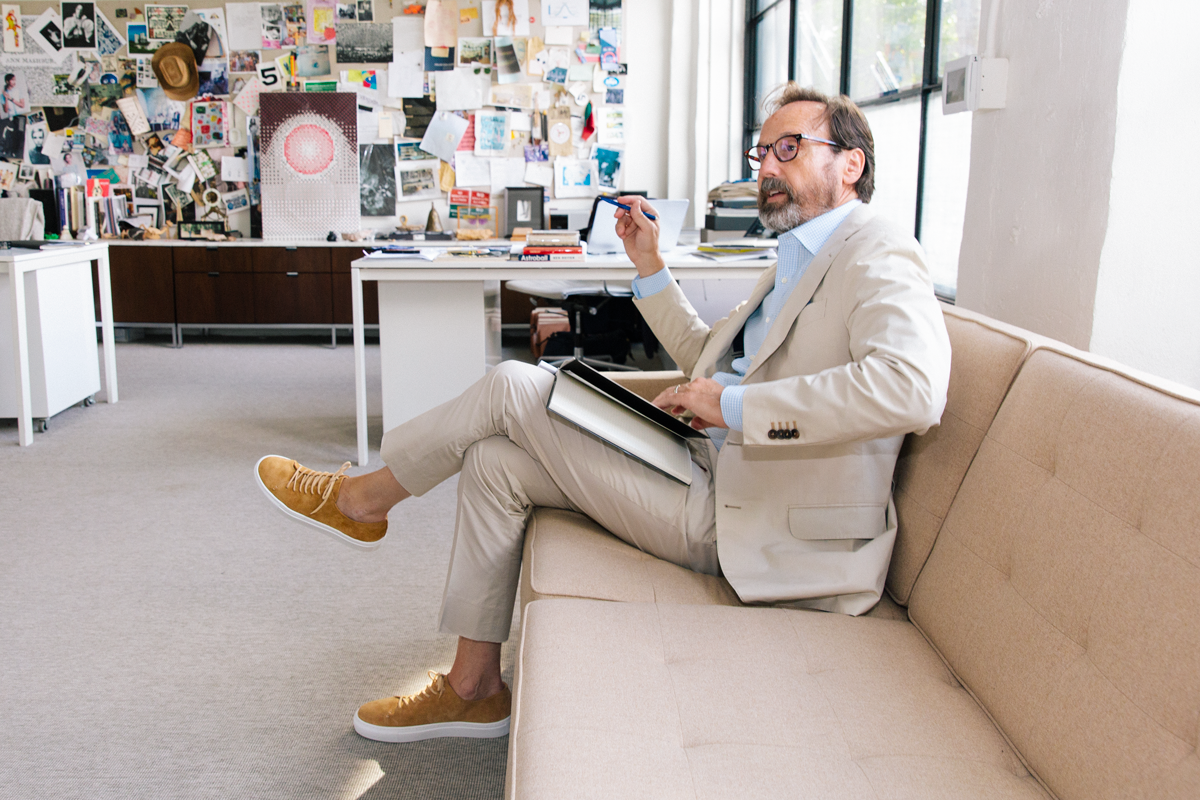 Whole-cut sneakers in the office – just testing out the look