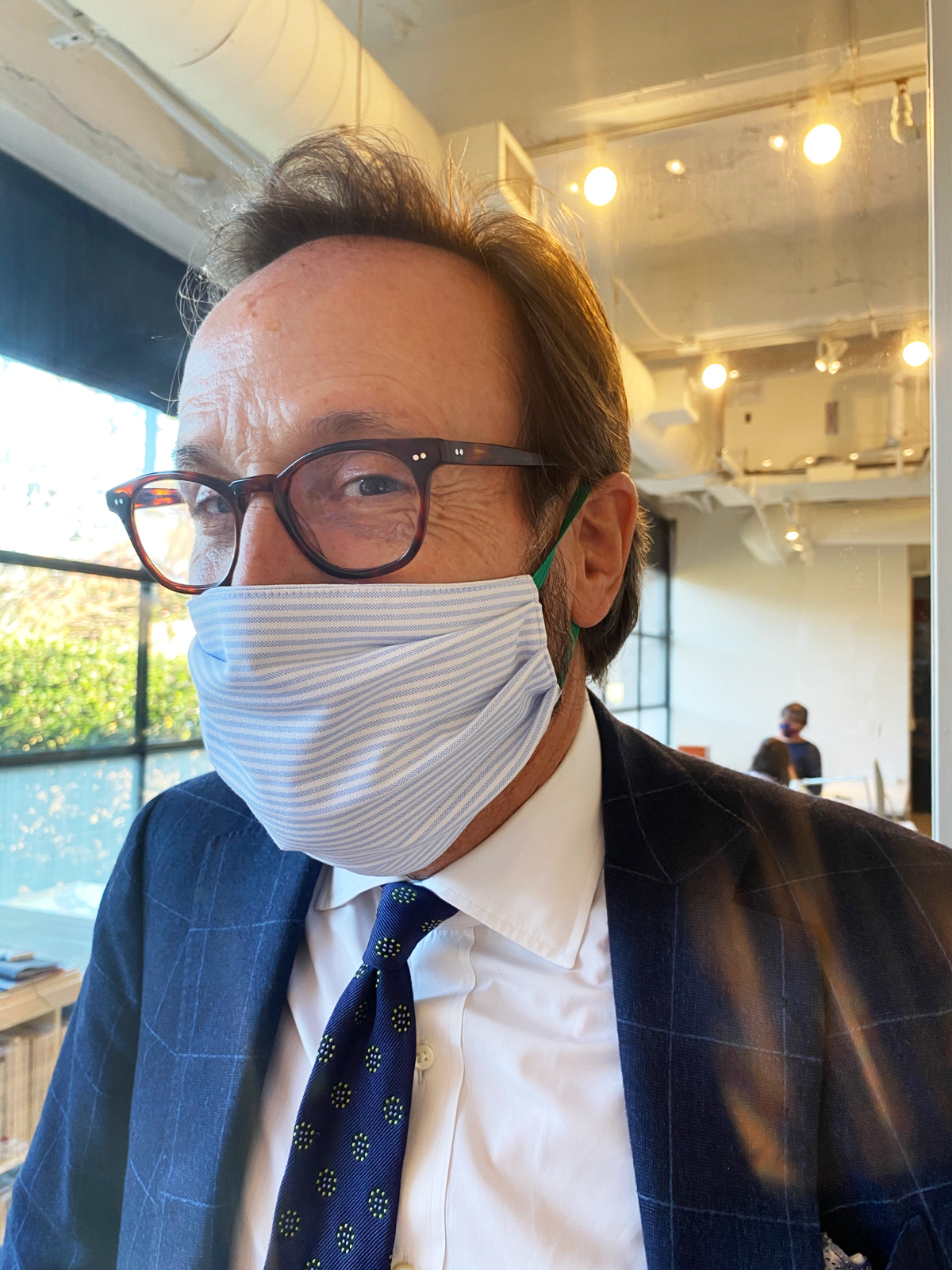 Hey Bill. Unbelievably, still a timely question. Man, I guess it's been eight months, right? They've become too commonplace now to even be worthy of a joke (though I got a lot of mileage out of the Masked Singer references in the beginning…) but they remain a bit of a sartorial quandary. So your question is a great one, and I'm surprised no one's asked it sooner.

Honestly, we were on the fence about selling them in the first place. We made some when supplies were running low back in April, but those were donations to hospitals and shelters, not product for customers. We were hopeful and naive enough to think that the mask thing would be a short-term need! But by early summer, it was apparent that… whoa… we're all going to be wearing these for awhile.

So why not make them cool? And if you appreciate a fantastic shirt in a super high-quality cotton poplin or oxford cloth… you might want that for your face as well. So we got our shirting factory on board, and made some from the same yarn-dyed Italian fabrics we use for our woven shirts. The masks themselves vary, but they're all non-pattern patterns – small-scale stripes, mini-ginghams, solid end-on-end, mostly blue-based – so they're designed to go with everything you've got. Suit, jeans, polo, t-shirt, you name it. So those are my all-purpose rec, no question. We also made some louder ones in Liberty of London prints… those are kooky and colorful but timeless in the way you'd expect from a company that's been around 150 years.

There are a million more options out there… brights, camo prints, the free ones from Humana, the "performance" type material that looks like neoprene but probably isn't. So when do you wear what? New item, new rules… kinda. We kind of look at it in the same way that you might pick a tie, or as I told my friend Tim Cox… it's essentially a pocket square for your face. It needs to jive with what you are wearing, maybe amplify it, but not distract from it.

For me, solid black feels a little harsh, although I see a lot of those. If you've got a board meeting, or if you're wearing a suit, I'd go with a simple, classic pattern like the yarn-dyed ones I mentioned earlier. You want it to fit the ensemble and show respect to the people around the table, just like with anything else you're wearing. If you're on a Zoom call, you can sneak in a tad more personality with a Liberty print, but I'd venture to say that it's probably not the time for, say…. a New Orleans Saints mask. It may be on your face, but it probably shouldn't be in their face…the other guy might be a Patriots fan. And a disposable medical mask gives off a little bit of a surgeon vibe, which I dig, and kinda reminds me of that moment in Rushmore. "Oh, are they?" One of my all-time favorite movie scenes.

And, like everyone else seeking a bit of safe novelty these days, I'm excited about the holidays and what that might mean for your mask game. We did a limited release of holiday fabrics that I'm itching to put into rotation. Those Christmas Liberty prints with the animals are really speaking to me. (We used them for boxers and pocket squares last winter, but I missed the boat.)

So thanks for asking, Bill, because you're not the only one still getting used to this new accessory category. The good news is that it's fairly low stakes (a mask isn't gonna mess up your look as much as a jacket that doesn't fit right) so think of it as an extension of the rest of your outfit, make sure it's appropriate for the occasion, and have a little fun with it.