“My girlfriend gave me a pair of chocolate suede Chelsea boots.  Can you give me some suggestions on what to wear them with?” – Joseph C., via email 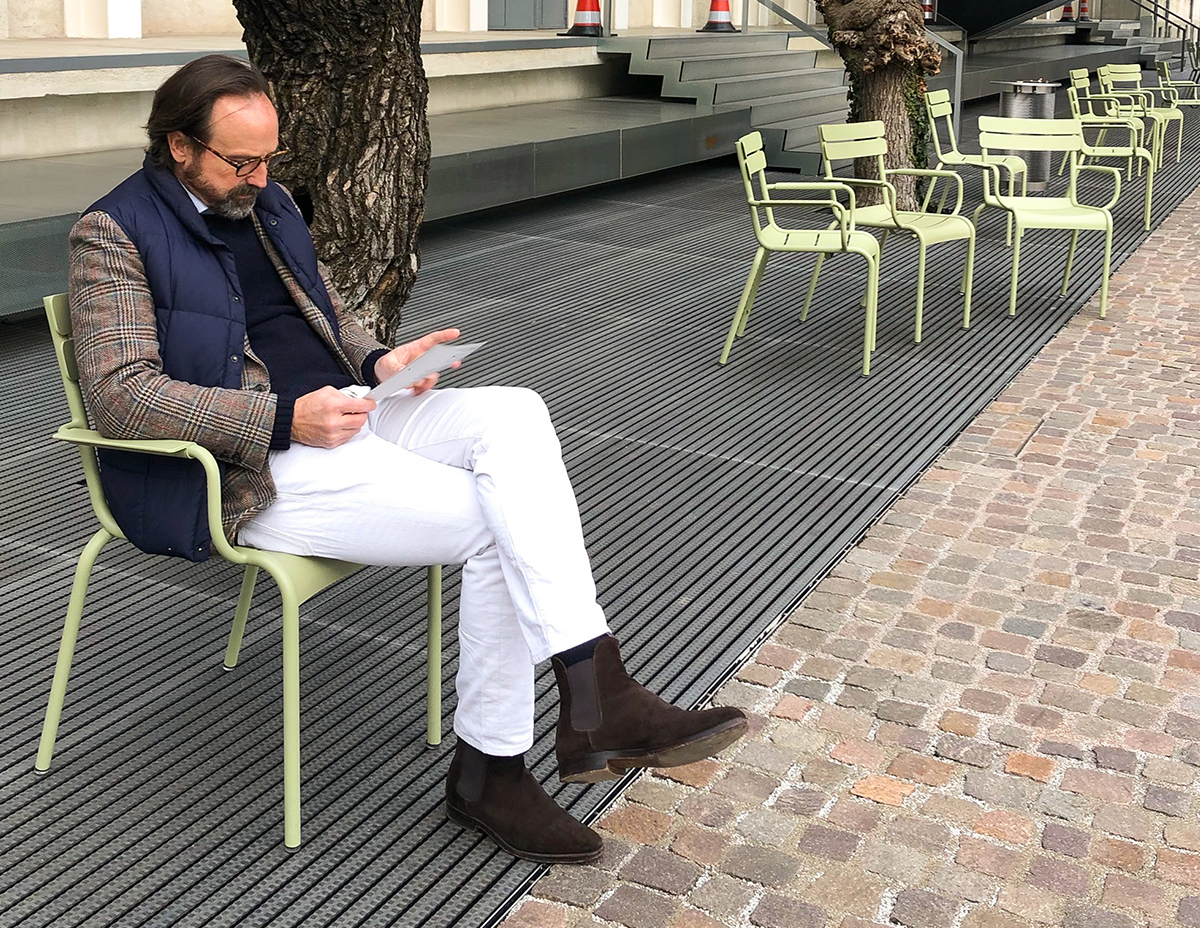 in Milan in a panteater jacket, navy down vest, and white cords

"Woke up, it was a Chelsea morning, and the first thing that I heard

Was a song outside my window, and the traffic wrote the words"

Oh, sorry, we're speaking of boots here… and one of my favorite subjects in the world, ever: Chelsea boots. I love them… they're almost like an Englishman's version of a cowboy boot. The Beatles wore them, the Stones wore them, Thom Oatman wore them… they've got a super clean silhouette, a refined and nicely-shaped toe, elastic side gore… and the other cool thing is the ease. Both from slipping them on and off, and the ease of mind when you're wearing them. They're a great back door shoe.

And maybe most importantly – given your fantastic question, Joseph – Chelsea Boots are super versatile in how they present themselves. They can have a boardroom look, or a backstage look, or they can have sort of a ranch-y outdoor knock-around look. Now – onto yours and how to wear them.

Suede tends to make things a bit more casual than calfskin, but that doesn't mean you can't dress 'em up, you just gotta go with a wintery fabric. And to me, there's nothing quite like the chocolate suede Chelsea boot with a pair of grey flannel trousers. Beautiful. The nap of the flannel pairs up with the suede that's on the boot – it's like they were made for each other, like Jesse & Frank. And same goes for moleskin or corduroy sport trousers, even dress trousers in a high-twist wool – it's almost like suede's Irish twin in fabric form. And you'll notice that in England there's no compunction about wearing them with a suit. We LOVE that. Hell, we'll even wear a black calfskin Chelsea boot with a tuxedo… b.t.t.b.

For a more casual vibe, any kind of 5-pockets – denim, cords, moleskin – are a no-brainer with Chelsea boots. Obviously blue jeans, but the pebble moleskin or the rose corduroy, if you're feeling it, would look particularly good with that chocolate suede. I like them with a finished hem but I also like them with a frayed bottom, too, like when you just cut them off yourself.

And then there's your top half. We think Chelseas & 5-pockets look great with a dark blazer and foulard tie, and maybe throw on a trench or a waxed field jacket if it's really cold, but it'll look just as great with blue jeans & a ribbed sweater and a quilted jacket, or a down vest if that's more your speed. Pretty much any in-season sport shirt fabric will look cool underneath. And since Chelseas have a little bit of rock 'n' roll in them, a military or motorcycle jacket would be cool, too. Once you get the hang of them, they're so easy to wear, it just makes sense to have that silhouette available for any situation. Honestly, about the only thing stopping me from wearing them is the temperature. I will put them away toward the end of cold or cool-ish weather, so 75° and above, I'm out on the Chelsea boots (except our Chelsea sneakers which go all summer long). Really, 60s and downward, I'm great. That's just me, though – Ann wears hers all year long, and you can, too.

And lucky for us, it's the time of the season…