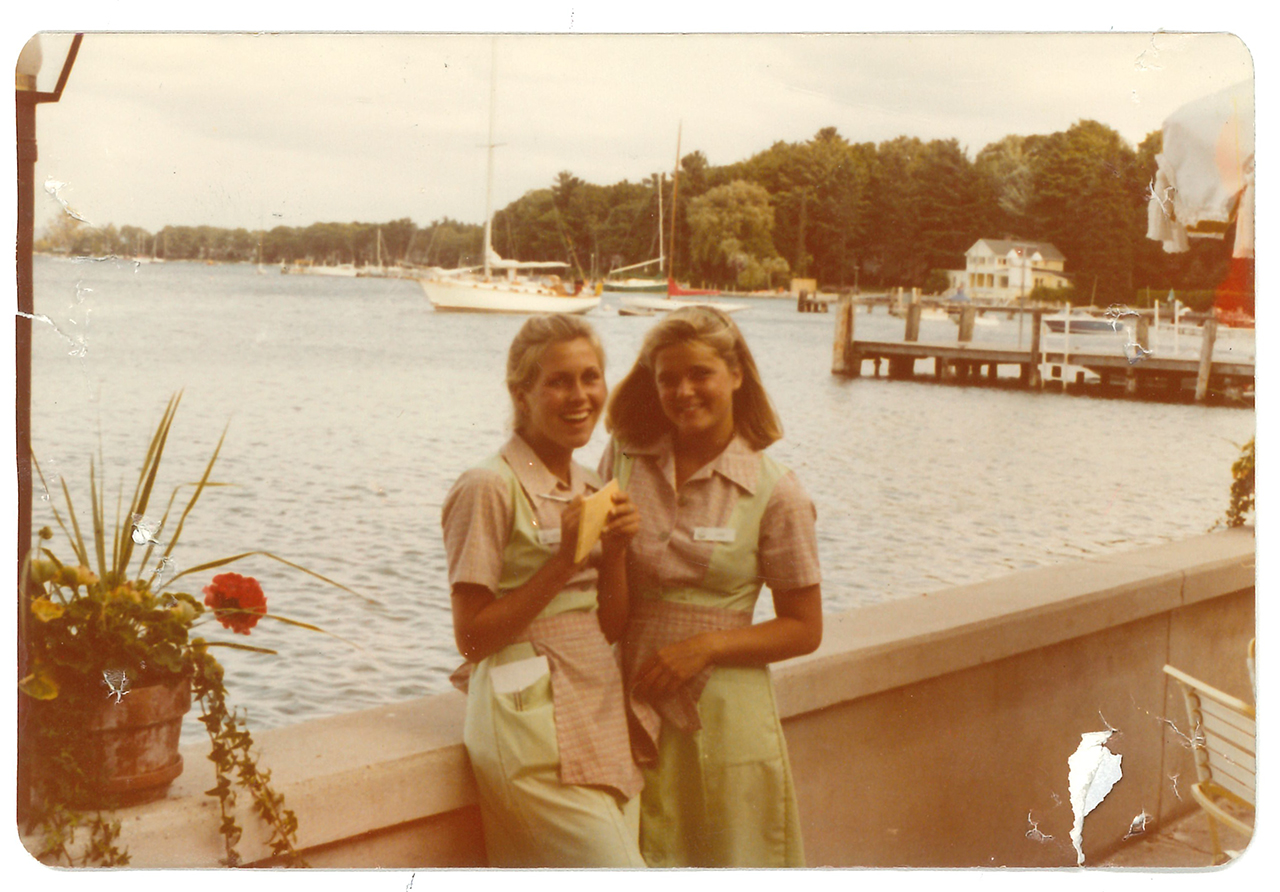 "may i take your order?"

In the summer of 1981, my best friend Cal and I spent the summer in Harbor Springs, Michigan, where we waitressed at the Little Harbor Club. Harbor Springs was (and probably still is) a preppy summer enclave on Lake Michigan, dotted with “cottages” (that are absolutely not what I would ever call a cottage) and beautiful old boats and fancy Detroit people whose families had been spending summers there for generations. It was a lot of old people – or what felt like old people to us at the time; we were 20 – and I remember many times having my wrist grabbed by a bony hand near the end of an evening shift, demanding to know if I was sure that it was decaf I had just poured. It was a little jarring. (It would be decades before I would understand how important this question really was.) All the club staff lived in an old Victorian house down the road, dorm-style. There was a bit of an upstairs-downstairs (or rather, down the road) thing going on. We would hang out there after work, drink Old Milwaukee beer, play cards, and laugh about the club members. It was a lot of fun. But the thing I remember loving the most from that job was my awesome waitress uniform.

It was a pale, lime green shirtwaist dress with pink tattersall trim and apron. I worked both the lunch and dinner shifts, but lunch was better – at least, look-wise – because we were allowed to wear sunglasses. Lunch service was outside on the patio, overlooking Little Traverse Bay, and the glare from the water was really strong. I had a pair of Ray-Ban aviators that were definitely too big for my face. They added a bit of a “lady cop” vibe to the outfit. I felt really cool.

I don’t know your history with uniforms, but in our house when my girls were young, the outfit kind of directed the activities. My oldest wanted to take riding lessons when she was 6. I’m not sure she cared much about horses, but she desperately wanted the get-up. After 3 lessons at the pony academy, she realized she was actually a little afraid of horses – and it was a lot of work with the saddling up and all – but the thrill of the boots and the tight pants and the velvet helmet kept her going for a few more weeks. There are worse ways of overcoming fear than outfit ideation, I guess. She did the same thing years later on the high school tennis team. She wasn’t a very experienced player, but who wouldn’t want to wear the cute tennis skirt? The actual sport was totally beside the point.

Even as a spectator, I have strong reactions to the uniforms. My middle daughters were more team-sport oriented (and definitely less looks-oriented.) The soccer uniforms were fine, but the basketball uniforms were NOT good. I was constantly asking Daisy, my middle daughter, if she could just pull up her shorts and roll the waistband a little. “The proportion is SO bad… please.” She would roll her eyes and explain the function of the long, loose, silky basketball shorts. I just tried to focus on the cute braid flying behind her and let it go. It wasn’t easy.

I have written a lot about the ease of having a uniform – a style of dressing that you don't have to think about so you can reserve some space in your head for other stuff that may be more important. The dress I am writing about today – the short-sleeved popover dress – IS in fact a kind of summer uniform in my book. It is much more modern than my dress from the Little Harbor Club… and not so waitress-y that it makes me want to ask if you would like the crab salad in the avocado half, or on the side? But it is a uniform, at least mentally. 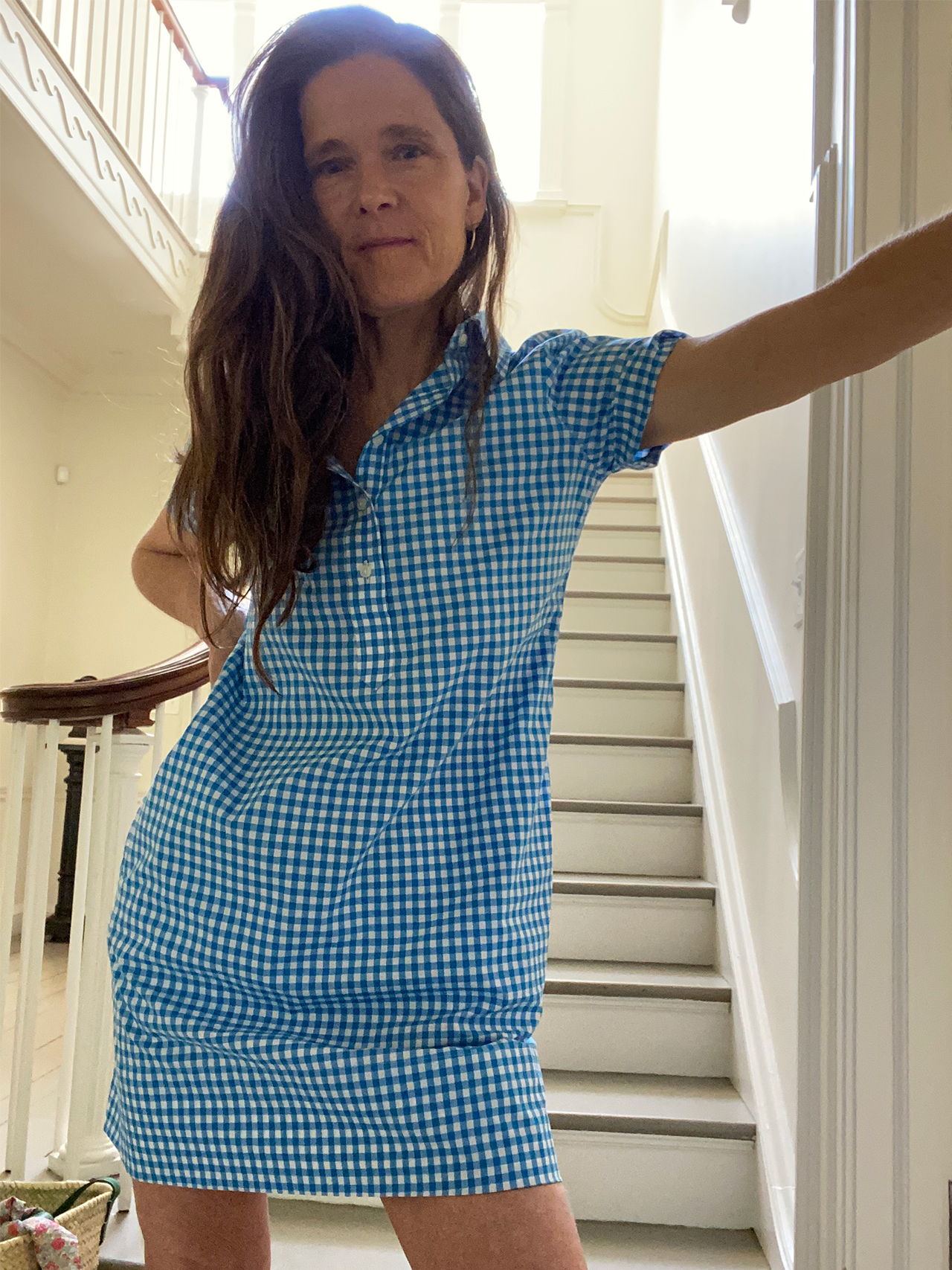 
It really is a fantastic dress. We have had it on our line for years – I want to say the first one was in 2015 or so – and it has been a favorite for all the practical reasons I mentioned. No thinking needed. Just pop it over your head and you are dressed. That’s it. A one-stop shop of a look. Sandals, sneakers, slides, espadrilles… maybe a cute scarf for your hair and you are done. Northern Michigan, coastal France, city heat of NYC. This dress looks good anywhere.

There are pockets for your lipstick or phone, and it is cute-short... but not SO short. The patterns we have right now are all summery and bright and cool. The gingham one I got... colorful printed Liberty Fabric... the cheery floral from Ratti that our team designed. All three are kind of on-the-nose preppy. But the simple shape and ease of fit are what makes the dress so great, and so the whole vibe can change with the fabric. We’ve done it in a madras-y plaid in years past, and there’s a black embroidered one coming in a few weeks that will feel more ‘sophisticated’ than ‘country club.’ It can be your uniform – you get to pick the reference and run with it! You really do need this, I promise.