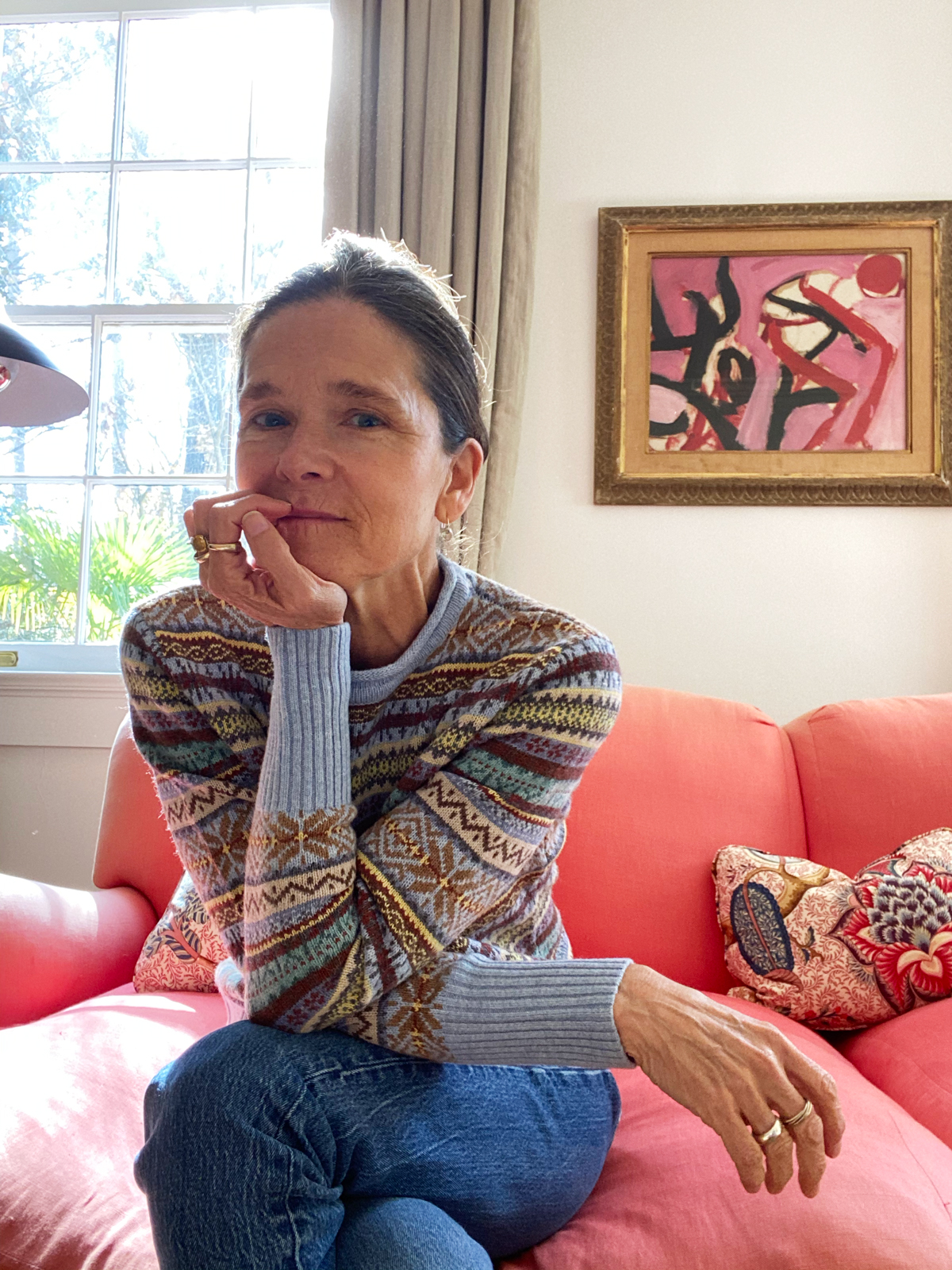 Last fall, at the very top of my closet, I found a Fair Isle sweater that I had knit myself in high school. I had forgotten all about it and though it had traveled from house to house with me through all those years, it was in a stack of sweaters that I kept around for sentiment, not for real wearing. I still have the photocopied pattern in my sewing bin, and the leftover yarn as proof, but I almost couldn't believe it. I was crazy for making stuff as a teenager – I sewed, crocheted, needlepointed, etc – but I have never been a great finisher (as evidenced by the knit tie, also in the sewing bin, that I started to make for my brother but I quit 7 inches into… also in the sewing bin…) And while knitting wasn't that hard, that particular pattern was a LOT to tackle as a beginner, so I was surprised that sixteen-year-old me had actually made it to the finish line. And so – upon discovering this – I popped it on and wore it to work. Compliments abounded, and of course, I had to share where it came from. I am sure I looked a bit like Diana in this new season of The Crown… eyes downcast… shy smile… "I made it myself." But let me tell you, the joy ends there, because that sweater was ITCHY. I could not wait to tear it off at the day. I finally understood what my girls where whining about when I used to force them into the sweet vintage fisherman sweaters that had been handed down. They looked so cute… who cared that they were miserable? Well, now I get it.

With that memory fresh in my head, I have a special appreciation for the Fair Isle sweaters we made this season because while they may not be 100% traditional, there are some improvements that have actually made them a little bit BETTER than the old-school ones at the back of my closet. The biggest is tactile. I love the idea of Shetland wool but these just… feel better. There is a slightly shrunken one with a little rolled neck that is made of lambswool and a pattern that is way more advanced than anything I could have knit myself back then. (Mine was only patterned at the yoke… I would never have made it through one like this!) There are a lot of colors in there but I especially love the sky blue at the banding. And there is a thicker, more pastel one made of wool and yak in a couple of pretty shades of brown and millennial pink. Yak! I know, right? Our head of design tells me that it is just as "snuggly" as cashmere, but more breathable… and also naturally anti-microbial and bacteria-resistant? I wash my sweaters as infrequently as I can, so I am IN.

The sweaters are new for the season, but I have loved a Fair Isle pattern forever, even before my own knitting project. The coveted brand back then was Dean's of Scotland. I still have one of those as well – itchy, too (what is it with that Shetland wool??) but it is a crewneck, so I can handle it with a t-shirt underneath. Nothing takes me back to high school in the 70s more than this pattern. It was ALL about the sweater. You had your Levi's… your Wallabees or Earth shoes… your feathered hair… and the biggest decisions you had to make were which Fair Isle sweater to wear and which guys to hang out with after the basketball game. Life was good.

If my high school nostalgia doesn't scratch your style itch – and I don't blame you – there are so many fantastic photos from 60s England. Much more aspirational than 70s Midwest. I guess it makes sense geographically. (These were traditionally knit off the coast of Scotland… the island is really called Fair Isle!) Twiggy… Paul McCartney… the pattern on his is pretty dang close to our Stevie, which is why we made a men's version too. What makes these images so cool, to me, is the juxtaposition of traditional and 'today.' They look groovy, but they're drawing on something from the past. And of course there are other ways to work this old-school tradition in, if a sweater is too much pattern. I am dying to wear my Birkenstocks with a pair of Fair Isle socks underneath. (Although I will have to wait because while we have tons of men's socks, the women's are not arriving next week! Those, too, are special and hand-knit, but on a different island - they come from Japan! For now, I can at least snag a pair for Sid and for my son-in-law, and check a Christmas gift or two off the list while I wait for my own. Anyway.) 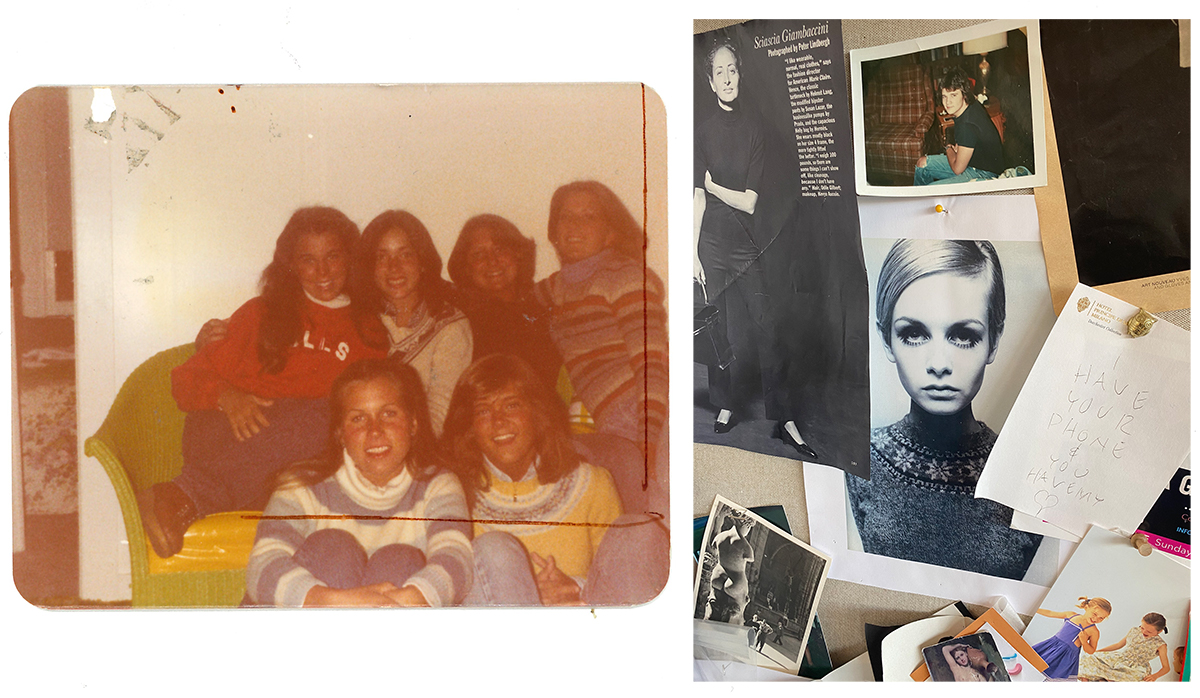 But maybe you are thinking about tradition right now in a slightly different way from this time last year. It is going to be a weird Thanksgiving. And sad, in a lot of ways. We want things as they were… and they won't be that way for the foreseeable future. But just because it's not like it WAS doesn't mean it can't be great – or even better? My new Fair Isle sweater is actually more fun to wear than my itchy old one. Who's to say this holiday can't be better as well? I ran into a friend of mine in the shop yesterday. She told me that she had just cancelled her usual big family dinner with her parents and in-laws. Now that it was only their two young children, they were chucking the whole turkey thing and deciding between oysters or fondue. In that way… a new tradition sounds fantastic!

You don't need me to talk about silver linings. (I am still working on finding my own, both pre- and post-pandemic, so I am not one to preach.) This year is a bummer in so many ways. It is a bummer to not even have the OPTION of following tradition, and to not be able to gather with your people in person. But I am inspired by the creativity that I have observed in others lately, and more inspired than ever to think this way myself. It is nice to be reminded that we can still make it up as we go along. On Thursday, I am going to wear my awesome new Fair Isle sweater… roast my turkey… make my mother's stuffing and my grandmother's pumpkin pie… but I am doing some new things this year, too. Maybe we will eat outside, or Japanese-style on the floor with pillows and chopsticks. Just something different to mark 2020 as the monumental and strange year that it has been. And while I hope that the loneliness of these times does not become the new normal (it can't,) I will take a cue from my design team and remind myself that it can sometimes be the itchy things and the discomfort that push us towards things that are better. At least that is what my favorite Instagram therapist says. Wishing you a happy and healthy holiday.