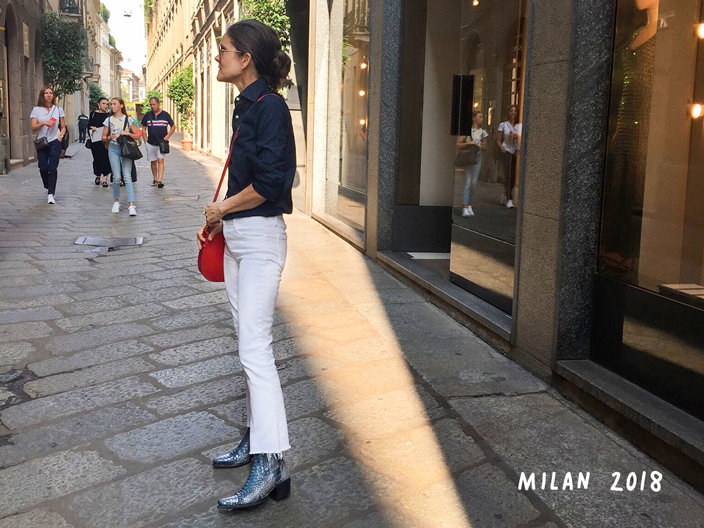 This fall in Milan in the very rock-star blue python

Recently, I was very flattered to chat with fashion historian and journalist Nancy MacDonell about cowboy boots for the Wall Street Journal. Her piece was about them as a trend this fall, but for me they've been an ALWAYS thing… year-round. We opened the doors of the women's shop with the classic Lucchese boot in roughout suede… in fact, it may have been one of the first shoes we had. And until I could rustle up (cowboy talk) a factory to design my own version, it fit the bill beautifully.

"Why do you love them so much?" was one of Nancy's first questions. I explained that the fashion editor in me is guilty of romanticizing the whole western thing. In that job, we created stories and designed shoots around pieces of clothing in an effort to give practical context, but also to stir up emotion through the images. Because it's not just a shoe or a sweater… it's the feeling you get from wearing it. We have all just celebrated Ralph Lauren's 50th year in business (maybe you saw it on Instagram?) who was truly the master of this. The 1980s were – to me – his decade of excellence when he dominated the whole aspirational lifestyle thing. His vision of the American West filled the front section of every magazine I looked at for years (there were a few other themes, too… English gentry… Ivy League…) There was a particular model who appeared in a lot of those ads, a regular, who was the subject of a huge adolescent crush for me. And believe it or not, I eventually crossed paths with years later in NY. It was soul-crushing. Without the perfect chambray shirt and chaps, he was just… a regular guy. And the faraway, dreamy-eyed look in his eyes was probably more about THC than romance… because the only thing he asked me that night was if I knew where to buy any marijuana. The illusion was shattered. And just another great example of how what's in your head is often better than reality. Ouch. So for awhile, I had this grand, RL-fueled vision of the Wild West and all I wanted to wear was turquoise jewelry and tooled leather belts and ripped-up Levi's 501s. I had a single pair of cowboy boots I had scored at a thrift shop in Denver when I was in college, but my friend Doug helped me expand my collection. He worked alongside Sid at Ralph Lauren. (Yes… rejecting the stoner model was the right move… my future boyfriend-then-husband would actually work there!) Doug was incredibly talented. He sourced and bought all of the vintage western wear for Ralph himself (and a million other things) and had a knack for sniffing out this stuff. He hooked me up with one of his contacts, who sent me two pairs of perfectly worn-in boots in a kraft-paper-wrapped box from a random PO box in San Jose. This was long before eBay, and I hid her information carefully in my Filofax, knowing what a gem she was.

It's been a couple of decades, but I am still totally into the cowboy aesthetic. I occasionally throw a western shirt in my line, and I collect old rancher-style belts that can push a look over the top. The big ruffle trend right now pairs really well with this. It's a little Petticoat Junction, or Katharine Ross in Butch Cassidy and the Sundance Kid. You can do it on a smaller scale, too… tie a piece of velvet ribbon around your neck and you can look like the pretty saloon owner! A couple of lines really lean into this idea – we carry Isabel Marant Etoile in Atlanta (the French are crazy for the American Western thing) and Ulla Johnson does this look really well, too.

But my very, very, very favorite expression of this is a Chelsea-ish cowboy boot. I love this so much I wear it 9 months out of the year – and it'd be 12 if I were lucky enough to be out west all summer. This version has been going strong in my line for four years now. To me it is classic and edgy at the same time. It is the BEST for support and walking. I always bring a pair on our big twice-a-year Europe trip when we visit factories and trade shows and walk 12 miles a day. The Cuban heel gives me a little height, which I appreciate, because sometimes, counterintuitively, a truly flat shoe isn't as comfortable for distance walking.

I have lots of skins – flat leather, suede, and both the brown and the blue python – but the suede is my favorite for the practicality. You can hit it with a suede brush after it rains, so it's the perfect travel shoe… because who wants to pack a pair of rubber wellies? The black can go a little more rock-and-roll (great with that Miss-Kitty-style choker) and the brown is a little more straight-up western. But day-to-day at home, I wear them most often with jeans and a very simple cashmere cardigan or a button-down oxford. I'm wearing a pair right now as I type. It just adds a little rough-and-tumble-ness to a preppy-feeling look. For weekends, I'll do a simple t-shirt with a thick western belt and boots. I've been more into the pared-down look lately. So whether you're like me, fantasizing about riding a horse and gathering water from the well (in fact, horses scare me a little,) or you just want to look cool… you need a pair of western boots, I promise.

Last summer in LA in the aforementioned go-to look…