We are experiencing high volume right now and orders may take a few extra days to ship — if you need your items sooner, consider expedited shipping. 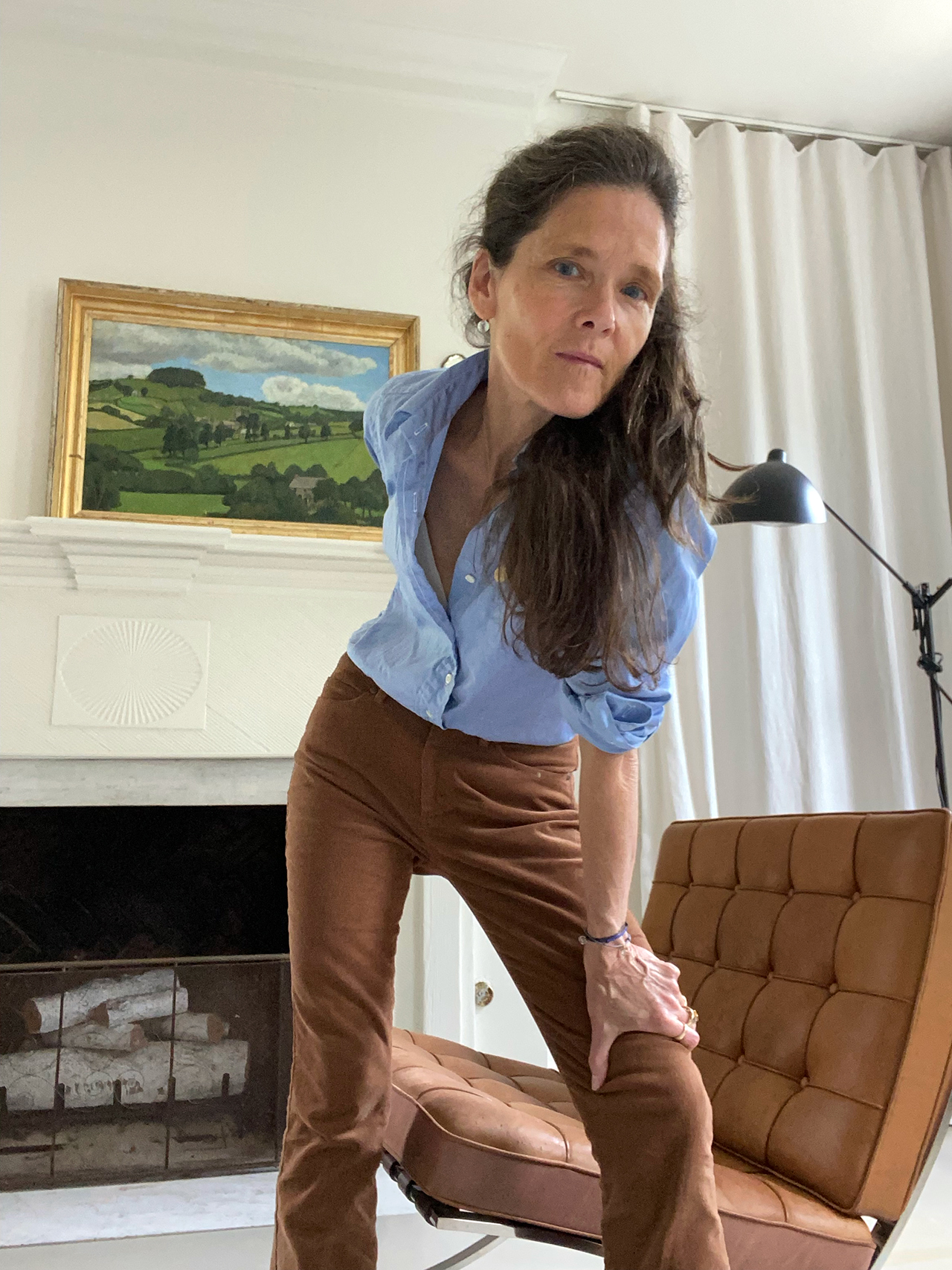 This post is going to be rated PG-13. Consider yourself warned. This fall we have finally made our 5-pocket jeans in stretch corduroy. And cords make me think of boys — Sid, mostly, but boys in general and all that goes with the pursuit of them. All I have to do is sit down and put my hands on my legs and feel the little ridges of the fabric, and I am transported to one of two scenarios. In one of them I'm wearing the pants, and in the other I am wanting the boy in the corduroy pants.

There is a time frame for many of us that involved Levi's baby-wale corduroys in assorted colors. Very 70s. For me it was junior high. My girlfriends and I would coordinate and assign a day to each color. I kind of remember Thursday being baby blue. This was a big deal because it took years to talk my cheapskate mother into buying them for me in the first place – most of my pants were Plain Pockets from JCPenney, which she insisted were exactly the same. (They were not.) We would all wear the same color cords with some kind of novelty t-shirt on top. It appears that this was kind of a thing even with other sets of girlfriends at other schools. My friend Sonia, who grew up in Virginia, remembers that her light blue day was Tuesday. She wore hers with Earth Shoes and a tie-dyed, handpainted "Sonia Begonia" t-shirt. She is a few years younger than me, but her memories are remarkably similar. And I loved hearing that her corduroys were not actually the Levis but Sears Toughskins! Now I love her even more.

Anyway. To this day, when I wear cords, it's not just the tactile sensation that gets me … there is an emotional component too. They are soft and comforting, but they also make me feel like I am back in my youth, confused and hormonal but moored to the routine of brown on Mondays and blue on Thursdays. Back then, getting dressed in the morning felt so important – like it dictated what they day might hold for you. Apparently I spent a lot of energy thinking about this; maybe uniforms would have freed up my brain a little. It is a wonder I learned anything academically. There must have been some cool boys in our class who wore them – Levis cords were for everyone – but no one in particular comes to mind. I pretty much stopped wearing corduroys after that intense period of junior high. But someone else I know never did. Since the day I met him, Sid has had a steady rotation of Levis cords in his wardrobe. He now makes his own, but still has almost every color of the originals. (I know because I just moved a stack of them to the new house.) I think he looks great in most things, but for some reason, when I see him in the cords I kind of want to make out with him. Why is that? Is it a stretch to say that it activates some dormant adolescent part of my brain? Getting a boyfriend in junior high wasn't exactly a layup, but now I have a boy that I kiss any time I like. He even lives with me. 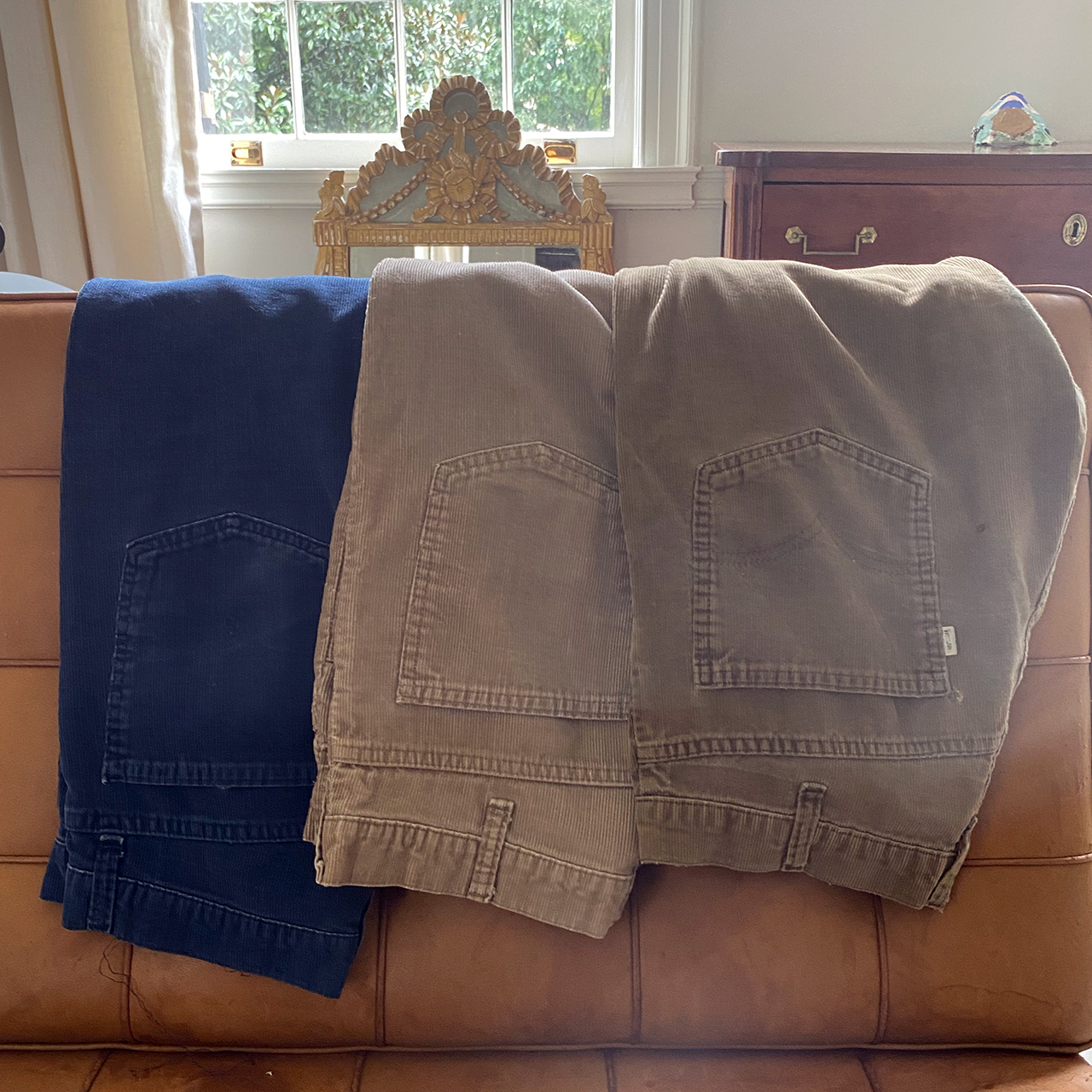 
I can tell you HONESTLY that you really do need a pair of these. As you can imagine, there are very few things I need and it is rare that I walk to the store and have a shopping spree. I just don't have a lot of room in my closet. But last week, I went over to meet someone and ended up walking out with three out of the four colors – and my friend in the dressing room next door scooped up two pairs herself! It was the most fun I've had in the shop in ages. I had forgotten how much fun it is to try on clothes with other people – and it was not altogether so different from the camaraderie of those junior high phone chains on school nights, all planning what we'd show up in the next day.

Kissing aside… cords are just cool. The fit is flattering and the fabric feels like fall in the best way. It is soft and lightweight enough to wear now and feel like the season has turned, even if the temperatures haven't really dropped yet. I got navy and cognac and mustard. (The ivory is great too but I own a lot of white pants.) The mustard wide-legs feel the most 70s to me… I am going to wear them with the navy Cydney turtleneck. More sophisticated than a Sonia Begonia tee. Probably no one is thinking of kissing me in this outfit – it is not the sexiest look – but it is one I love. They would also be great with a Boyfriend Shirt unbuttoned just so. I will try that and see where it gets me with Sid.