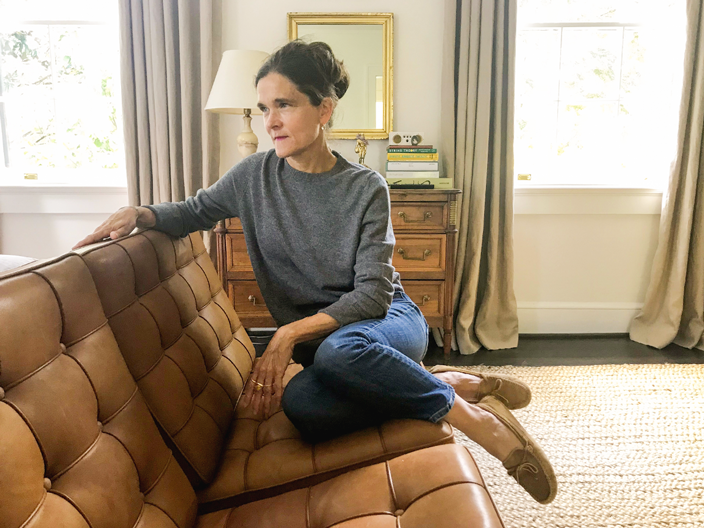 I love a slouchy boyish cashmere sweater nearly all year-round. I didn't grow up wearing cashmere – I am sure my practical midwestern mother would have thought it too "luxury" but once I moved to New York, I started collecting sweaters at thrift stores and the occasional sample sale. I liked how it felt against my skin, and the way it felt like an investment. I got a really good hand-me-down from Sid's best friend Lyons when I was just "the girlfriend." I took it as a compliment – thinking he must have thought I was a keeper for Sid – though I think it was just his brother's and a smidge too small for him. (Good life lesson. Usually boys are not thinking as much as you think they are thinking.) But whatever his reasons, Lyons handed it off to me – a thick, densely-knitted charcoal v-neck from Ballantyne of Peebles in Scotland that has seen many, many, many days. It is probably close to 50 years old.

I wore it again and again and again, through pregnancies and winters and just hanging around the house, but truth be told... it was not so flattering. The thing is – anything made for a man will never fit you the way you imagine it in your head. It's a sexy idea, sure, and seems very insouciant and cool and devil-may-care to wear a castoff from your boyfriend's closet. But I know from my days as an editor and stylist that in all those wonderful pictures of the girl on the beach running around bare-legged in an oversized sweater, there is a big plastic clamp in the back, so that the neckline goes to the right spot and the shoulder seams fall right and she doesn't look too bunched around the middle. I would know. I was the one running in and out of the frame adjusting it! And that's how I looked in Lyons's sweater. Bunched and, frankly, chubbier than I was. And so today, my crackerjack design team – who know how to make things fit and flatter and own their spot in your wardrobe – made a sweater to look like it could have belonged to your boyfriend (or in my case, his best friend), but to fit the way you imagine yourself looking in it. Which is to say – all feminine. We have made a V-neck (that dips just low enough) in the “boyfriend” fit for years, but I adore this year's crewneck update.

A trim, tight one has its place too, but the luxury of MORE material is what I love about the boyfriend style... the way it drops and folds as you push up the sleeves feels so luxurious to me, and it's long and oversized in a relaxed, weekend kind of way. My daughters have been stealing from that tennis-sweater pile in Sid's closet for years. They can afford to look more bunched-up and sloppy; their youth is working double-time. But they'll probably love this updated one even more. I'll wear it with jeans and driving mocs on the weekend, or over a pencil skirt at the office... they'll look cool with it layered over a long full skirt and sneakers. You can pile loads of jewelry on top as it is so simple – or classic little pearl earrings are very Upper East Side chic.

And by the way – cashmere doesn't have to be fancy. Sid wears his to play football (well, once a year at Thanksgiving) and tennis. With proper care (and keeping the moths away,) it will last longer than you. I machine wash mine on gentle and lay them flat on a towel to dry. No need to dry clean – though they do come out looking all pressed and pretty – but a quick hit from the iron will achieve the same effect at home. If it's too late and the moths have struck – as they did for me last summer – just darn up the holes and enjoy it as a TRUE weekend sweater. It is kind of like that funny sense of relief when the new leather couch gets a stain or a rip... it's not perfect anymore! Now you don't have to live in fear!

I throw mine on every morning when I am doing the school run before a shower and work – even in the summer because the air conditioning can hit you hard after you've been under the covers and haven't moved around enough to warm up. The grey and navy are essential — but we also made the most terrific day-glo orange. Trust me, though; it isn't too much... super flattering and a lot of fun. And maybe it's time to return that sweater to Lyons. He has a 14-year-old son now, and I think it would fit him beautifully. Maybe he can give it to his girlfriend.