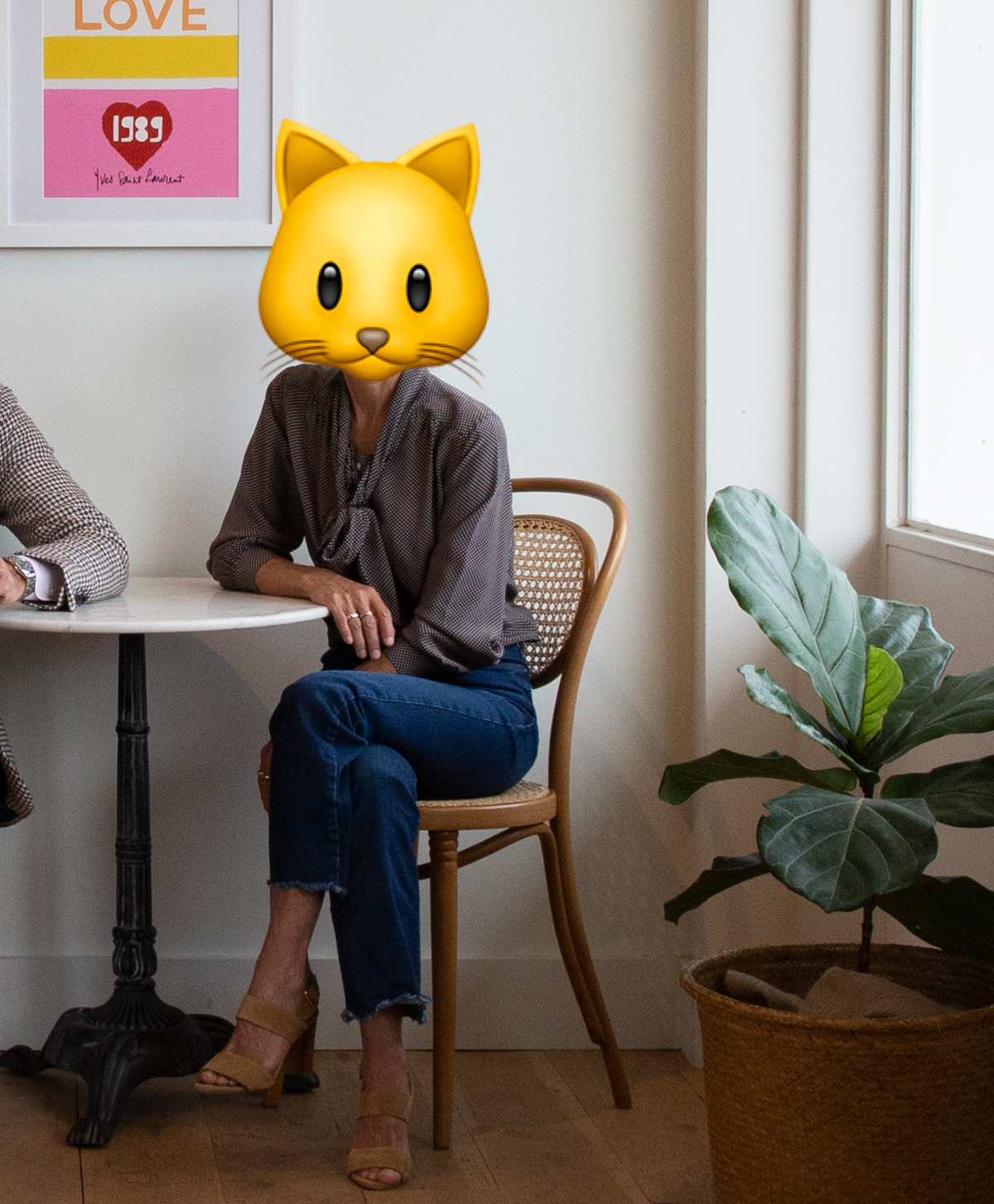 feeling kittenish in the pindot tie-neck

We all love cats in our house… Sid especially. He was never allowed one in his own home growing up, so he got one in college and called him Walter. Early in our marriage, he gifted me with one as a birthday surprise – named Kitty – and we have had quite a few since. (I have since wondered which girlfriend he may have "gifted" the college cat to… Walter was long gone by the time we met in New York, so I guess he never made the trip north.) Many years later, a tabby named Tiger had the longest run… 9 years. The girls loved to play with him, and he very patiently let them dress him up in all sorts of bonnets and American Girl Doll hand-me-downs. Tiger left us in 2008, but this past March, we got a pair of kittens (brother and sister – same litter!) as a birthday present for our daughter #4, Harriet. She is a major Royal Family fan and promptly named them George and Charlotte. They follow us everywhere and are as adorable as you can imagine. Sid is always the first to wake up so he feeds them every morning. They meow so loudly together, it sounds like European sirens in the kitchen. They are little gluttons.

The thing about cats, though, is that they are not for everyone. Love them or hate them, they demand an opinion. I once asked my friend Sonia if she liked cats, and she replied, very dryly, "I like to… watch them." As in, not have them. Perfectly put. But regardless of how you feel about the animals, you absolutely need a pussy-bow blouse. I am too shy to even say it out loud, so we call ours by the more neutral name "tie-neck blouse," but the look is the same. And despite some very horrible PR a few years ago, the etymology and the style are quite innocent! Per Wikipedia: "A lavallière or pussycat bow is a style of neckwear often associated with women's and girls' blouses and bodices. It takes the form of a bow tied at the neck similar to those tied around the neck of kittens, cats, and the like." cat people from way back

I like that! I imagine we as women are now thinking of ourselves as representing the "and like" category (no pun intended,) as the style dates back to the 19th century and it is fully mainstream by now. What I really want to imagine myself like is not a kitten, but the very human Catherine Deneuve, who made the look famous in my mind. Covered but sexy. I like that too. Yves St. Laurent adored this style and designed millions more like the one she is wearing. And if you google 'secretary blouse,' something similar pops up. It is fitting because another iconic wearer of a pussy-bow blouse was Peggy Olson on Mad Men, who started out as the secretary before working her way up the ladder. The title is so dated in that sense… no one goes to "secretarial school" anymore… it always sounds a bit sexist to me. But in government, it means you are in charge. Secretary of State sounds awesome, so I am going with that. Kitten or boss… or both… you get to choose.

I know I have already written about the idea of a uniform – and admittedly, I failed to mention this one! – but for me, this is one of my most-worn and most-loved items when I have to dress up. A cotton button-down or spread collar shirt is my go-to for more casual things. But when I really want to feel like a lady – a very grown-up lady – it is the tie-neck blouse every time. We have had this on our line for several years in all kinds of fabrics, but my very favorite is the super-heavy 40-momme silk. Cheat: momme is the weight of the silk thread… and 16-19 is considered good quality… so you can imagine what 40 feels like! I love it for its practicality as much as its luxury. (For me, those are synonyms, anyway.) It is thick enough that you don't have to iron it when you travel… and that weight makes it incredibly durable. It feels like heaven. Very luxe. As much as I love the 40momme, we got feedback from our Houston and Dallas stores that it can get a bit hot for year-round wear, so this fall we have introduced some lighter-weight bow blouses with our Texas friends in mind. 23momme silk in very chic brown and navy pindots. Another good option if you run hot is the sleeveless version, which we make in several colors. one of my favorite pics from a few years ago, of the ivory tie-neck

There are lots of moods this style can take. I wear it with jeans, trousers, a little pencil skirt… and if you add tall boots, it gives it a super 60s vibe. More Jean Shrimpton than Peggy Olson. I haven't done this yet, but would absolutely wear it to a black-tie event with a long black column skirt. Maybe even silk trousers for an Old Hollywood pajama-ish feel. Paired with tweed it can look extremely English country… back to Harriet's royal kittens!

And you don't always have to wear it tied in a bow. It's great in a simple knot with the ends hanging loose. I often double-wrap mine and it becomes more of a neckerchief like the men in The Patriot. I might undo the top button and tie it loosely without a bow, just a loop-over. It's less prim-feeling that way. You may not need all the kittens I have owned in my lifetime – but you definitely need a pussy-bow blouse.