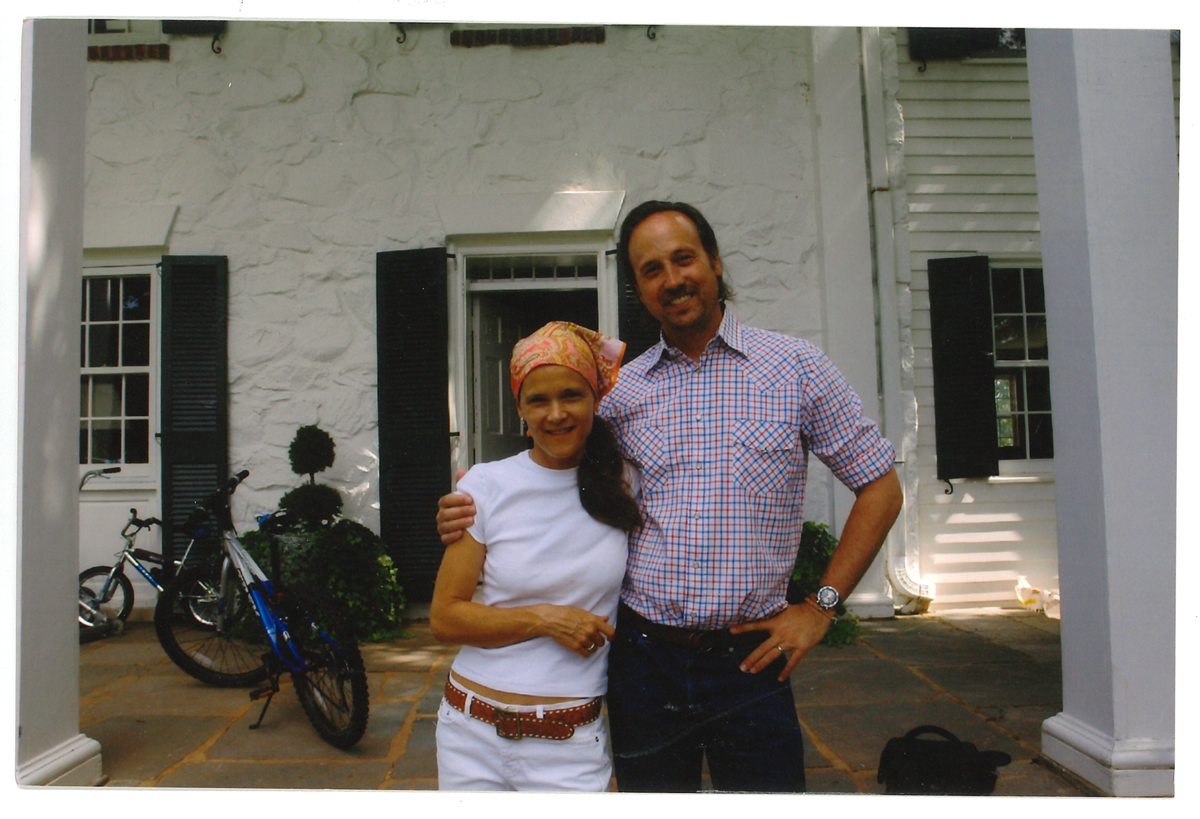 not Wisconsin, and not my house - we were on a road trip – suburbia would have been a lot easier if it looked like this

For me, a scarf isn't just a scarf. It is sort of how when we look at old photos… we don't just see ourselves, we FEEL ourselves at the time. I still cringe when I find pictures from my college years. A stranger, or even a friend, would see youth and energy and beauty, but I see insecurity and confusion… a girl who was just trying to figure it out. Even the wisdom of age doesn't help. It is burned into the image. Whatever emotion I felt staring into the camera at the time jumps back into my head. But when I look back at all the pictures from our time in Wisconsin, taken two decades after all those awkward college snapshots, I don't cringe or quickly flip past them. In so many of them I see happiness smiling back at me. And in so many of them I am wearing a scarf on my head.

In 1999, Sid and I moved to Madison, Wisconsin. Before this, we had been in Connecticut, and before that, New York. Even if Connecticut wasn't the city proper (the place I had lived the longest ever!) we were just a quick train ride away. We had made it our home, and I still got to work freelance as a fashion stylist in the city. But when Sid got this amazing job offer to run design for Land's End, I said, sure, let's go, feeling fairly confident that the post would last a year or two and then we'd come back. (Those creative jobs were famous for churning through new people with new ideas – they hire you to come and make a change and then decide they liked it just fine before…) So why not Wisconsin? The land of my childhood! The Midwest! Great for his resume – a little more money – it might be fun - and soon enough we'd probably be back in a town with a Metro North station.

But after I unpacked all the boxes and got the girls sent off to school, I looked around and realized where I was. Somehow I had ended up in exactly the kind of place I had grown up trying to leave… exactly the kind of suburb that made me move to New York in the first place. (The trope: NYC = sophistication! Action! Importance! Career!) I was still in my thirties, but I could feel a midlife identity crisis beginning to form. The real punch to the gut was when I was invited to join the neighborhood ladies' bowling league. Back in Connecticut, I had casually opted out of the tennis circuit and the Junior League – feeling a bit superior and thinking of those a cliché… a sure route to housewife status. But a stay-at-home mom in the bowling league was a new level. I couldn't do it.

Of course it was not the "staying at home" part that was new. I had gone through a similar identity crisis a few years before when I first quit my job at Conde Nast. But that had felt like a choice. The commute became too much, and I had these two little girls at home, and we lived in this amazing apartment above a stable on the most incredible estate on the Long Island sound. Every day we would go down the stairs and see the horses and play pretend on the beach and it felt like a fantasy… not suburbia. If I had been on the Internet in the early 90s, I might have been tempted to turn it into some kind of blog or book à la Amanda Brooks' Farm From Home because it really did feel magical.

But that felt a million miles away from my new life in Wisconsin, where I was once again the new girl in town… this time as a snob who could not bring herself to bowl with the neighborhood moms. (An aside – I actually LOVE to bowl. Sid and I and the girls probably spent close to a dozen New Years Eves at a bowling alley. But that was so much fun with a cold pitcher of beer and my family… not at 10am with a bunch of women I didn't really know at Schwoegler Park Town Lanes.) In hindsight I can see how young and proud I was… unmoored and freaked out and scared of what I had gotten myself into.

And so I can also see now how something as small as a scarf, a little square of fabric, became so important to me. I got myself a little uniform of cute stretch khaki pants, cut slim with a little kick flare on the bottom, and hemmed at home to above the ankle. Flattering, but not too tight, machine-washable and -dryable, with pockets for mom stuff. I snagged them at the sale rack at Old Navy next to the Target in the strip mall and somehow had the foresight to buy 5 pairs. They weren't jeans… we were still a few years away from Seven For All Mankind and the golden years of premium fashion denim. They were kind of like 'slacks' which felt suburban – but in a cool way. I'd wear them with tight white t-shirts, sometimes a fitted polo. On my feet, driving moccasins with the rubber soles, or ballet flats, or Barbara Shaum sandals in the summer. Mom chic, I thought. And then – the scarf on my head! I felt like me. full mom getup at school, slacks and all

I went through a couple of phases of wearing it in my ponytail (the trick is to loop it under the elastic so it won't slide out or blow away in a gust of wind.) In colder weather, I would sometimes wear it around my neck on top of all those amazing Lands' End cashmere sweaters that, with those same khakis, made up the winter version of my housewife uniform. But most often – atop my head. Tied washerwoman-style: folded in a triangle, wrapped around my head, knotted at the nape of my neck. I have to admit that a head scarf looked a lot better on me back then when my forehead was smoother. But even though I am a working woman again, and don't need my chic housewife uniform, I still do the scarf thing – I am wearing one as I type. It screams summer to me, and it makes packing easy. T-shirts, jeans, sandals, and a few scarves. That's it. And almost twenty years later, I have quite the collection. They make great souvenirs… memory-makers, and often affordable one at that. A weirdly chic bandana from the Cave of the Mounds gift shop… a pocket square I stole from Sid's closet… the more special silk ones from Etro or Hermes that he would grab at an airport duty-free shop on his design trips to Europe.

We have finally made our own version, in my very favorite size… 25" x 25". It gives you the most versatility to wear it around your neck or on your head or in your hair or around your wrist – and that is just on your own body. It is great on the handle of a tote bag. (I told you, summer!) It is even great as an emergency face mask in a pandemic. We called it the ANYWAY SCARF because you can really wear it… any way. I find that silk gets a little slippery on my head, so we went with lightweight cotton lawn in a couple of super classic Liberty prints that are small-scale enough to almost act neutral, and classic enough to wear year-round.

People create their identity in any number of ways. They do it with the bigger things like careers and clubs and hobbies, but also the tinier ones like an extra piercing in their ear or a tattoo or bright-colored hair. Even just sunglasses - my daughters and I have been watching Mrs. America and chic Gloria Steinem IS her aviators!!! My head scarf in Wisconsin wasn't quite rebellion, and it DEFINITELY wasn't conformity, either. It was just my own thing. A head scarf felt easy and yet special… a tiny bit of personality that made me happy and always fit. It was silly, but I wanted my girls to know me, or even just spot me, in the carpool line or on the sidelines at the soccer game, as their mother and no one else's. The small hit of happiness it gave me shines through in all those old photos – I can see that I feel like myself. And it makes me smile when I remember the toddler who asked me, when picking up a daughter from a playdate… "why do you have a napkin on your head?"