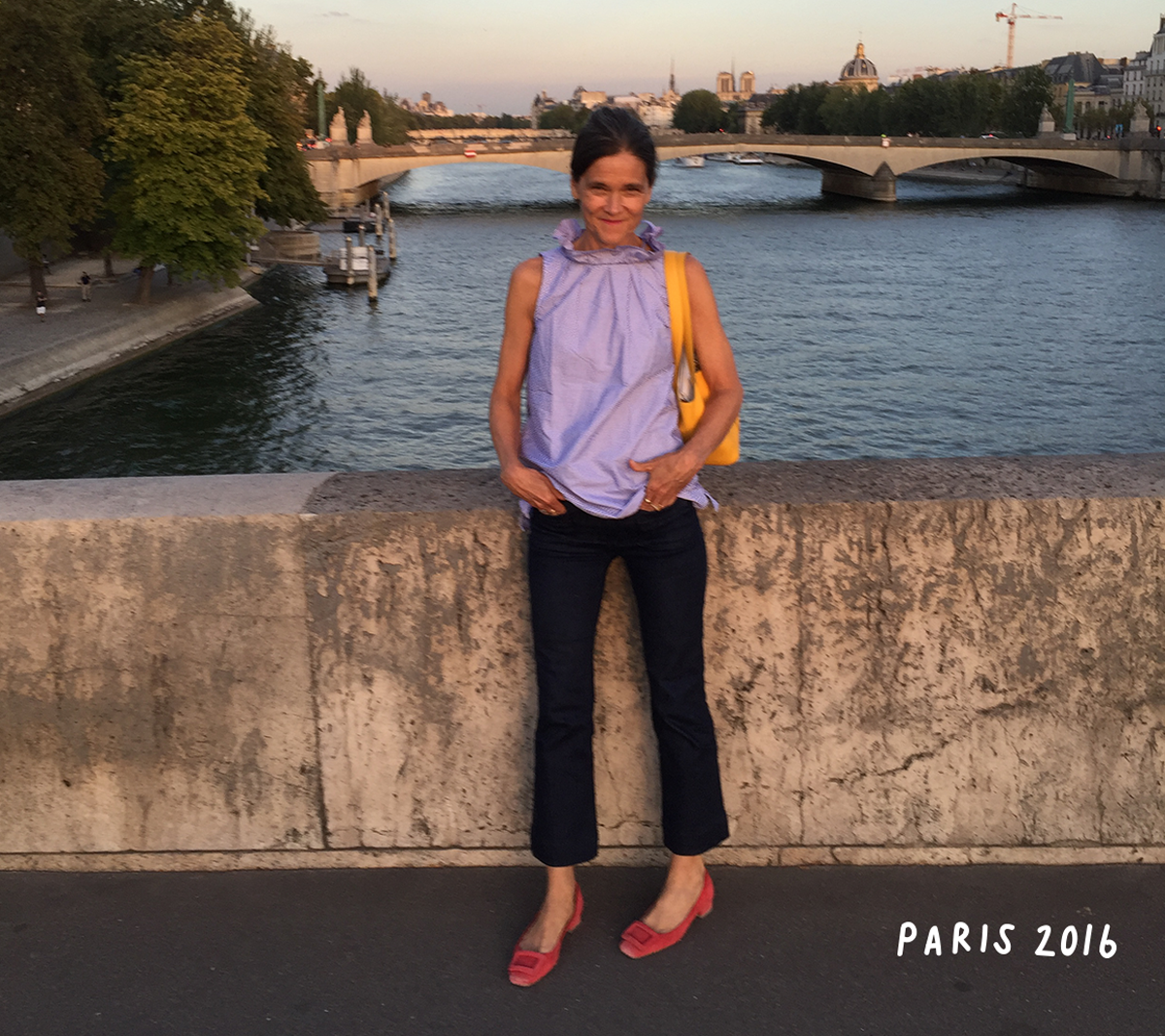 Scuffed-up shoes and me at home by the Seine

This Christmas, our daughters gave Sid and me the gift of 23andMe. Having been presented with test tubes to spit in, set in champagne flutes the month before, we knew what was coming... but that made it no less fun when our results came through the World Wide Web on exactly December 25. So that morning, we crowded around someone's laptop in the living room and read the results together. Truth be told, it was a bit underwhelming, and definitely not as much fun as the family dog's DNA, which had been presented to us the Christmas before. Still, aren't we all a bit narcissistic at heart? "Tell me about... ME..."

I'm not sure what we were expecting, but there were no life-changing surprises. I had thought my family was predominantly English, but was thrilled to learn that I also had a healthy dose of Swiss and Nordic descent, a touch of Italian, and – the very best gift of all – a big smattering of French. NOTHING could have pleased me more. As I have written before, Paris affected me in a huge way when I arrived there at a very unsophisticated 22 years old. There is no shortage of incredible inspiration there... everyone in this industry loves France... and the history of fashion there, particularly through the 20th century, is unparalleled. Though at this point I prefer the food in Italy after so much travel there, I am in love with almost all things French. Every home I have attempted to decorate has had a dash of Toile de Jouy, and my lifelong go-to perfume was picked up at Bon Marché on that very first trip. The "French girl" trope has been a bit worn out in the last few years, but I really do identify with that "minimal makeup plus a swipe of lipstick" look that is so often attributed to the Parisiennes... at least on the internet. And when my daughters were very young, and I'd travel to France for work, one of my must-dos (other than working,) was to shop for baby and children's clothes. I found so much charm in the little multipacks of onesies and cotton underwear at Monoprix. They were nothing fancy – Monoprix is like our Target and so it was all quite affordable, but it all had sweet picot edging and foreign labels and I loved to have the reminder of a faraway place once I was dressing my own little ones at home. On the other hand... I can just barely tolerate all the cigarette smoke (though it does remind me of my mother) and I really can't speak the language well enough despite four years of high school French... still, France feels like a part of me, and now I have the genetic proof.

So j'adore our Buckle Shoe, and always have... even before I knew that I was a staggering 6% French. For me, the inspiration has its roots in 1960s French cinema. The classic Pilgrim Shoe was designed by Roger Vivier and worn most famously by Catherine Deneuve in Belle de Jour. Here, my film student brother Chris would cringe – it is not exactly a critically acclaimed movie – and from a feminist perspective it's a little depressing. I appreciate her enterprising spirit, but anything involving marital sneaking around makes me too anxious to sit still through. It does makes me appreciate the innocence of an earlier time, when you could be naively influenced by something without the ability to Google it and think... oh... is THAT what that is about???

But subject matter aside, to this day, I have several stills of Catherine Deneuve in this movie on my inspiration board. As a style icon, she is impeccable. She looks so beautiful. The little suits, the box bag, the half-up-half-down hair that I copied for years... it's all great, but the shoes have become infamous. We have our own version, one that is a little less retro, with a buckle that matches the rest of the shoe rather than the shiny metallic ones as in the movie. Most of them are flat, though we also do a great midheel (also very French in and of itself to me!) And let me tell you, this shoe is just perfect. At 7/8", they have just the right amount of heel to wear all day on the streets of any city... and will allow you to hustle for just about as many miles as you can. The heel gives some support, and while they are not exactly orthotics, they are so much better than a true ballet flat. Trust me. Plus, just that touch of height, being a little elevated off the ground, makes you look like a lady who is making an effort. I love them with cropped jeans. The price point is such that you can justify multiples – the standard black and navy are good, but we just did a camel suede, which is always an amazing neutral. The pops of color can earn their spots, too. There's a metallic silver, a new denimish blue twill, and a kooky rainbow mosaic pair that looks very Italian eccentric to me, in the best way possible. I wear my old red ones surprisingly often, but my colleague Lizzie has a pair of royal blue ones from a few years ago. I am so envious and regretful that I passed on them when I see her clicking away on the streets of New York when we go up for market. Though there is a pastel blue suede that just arrived, and I'm thinking they may scratch that itch...

I have one last buckle-adjacent style reference to share. We are hardly the first to riff on this style, and as a young editor, I had a pair of navy pumps from either Ferragamo or Delman, with a shiny gold pilgrim buckle on them. I saw them as kind of chic and old-lady-ish, in a good way, and they were in heavy rotation as I was trying to develop my shoe game. I can remember being up at the Michael Kors showroom, and Michael clapping his hands at me. "I ADORE a pilgrim shoe... Ann, you look so chic!" At the time he was not quite as famous as he is these days, still deep in his business and not yet too important to be present for the appointment with the Glamour editor. Even so, the compliment was received just as greedily as it would be now... because he was Michael and he was amazing and he loves women and knows just how to make them feel wonderful. When was the last time someone clapped at something you were wearing? It feels good! You need a pair. I promise.