me and my old boyfriend

Last year, just a few weeks before the pandemic was named a true pandemic, I was in Charleston at the funeral of a dear, wonderful friend. She was creative and eclectic and had the very best taste and amazing style. Not just with interiors and clothing – but true, true personal style. Personality style. Part of that, I know, was a product of her upbringing – I have written about Sid's Mississippi but Charleston is on another level – just a different world. So the funeral was not just heartbreaking, but heartbreakingly beautiful. Church, music, gravesite, elegant drinks party afterwards. The South knows how to escort out their loved ones. Caroline was such a generous hostess and would have adored the fact that her celebration happened just under the wire of the lockdown – and that it would be remembered throughout the year as many people's last "event."
There is nothing like a funeral to bring all your people together, and among the guests was a friend named Lizzie Garrett Mettler. We embraced, said how great it was to see one another, and then I wondered what she was up to. I hadn't seen her since 2012, when her book Tomboy Style came out and we held a book signing in our shop. She'd had a blog back then with the same name, which seems like light years ago… practically pre-Instagram. I loved that book - I still love that book! It feels like me. Or rather, the ME I aim to be. It is filled with fantastically cool pictures throughout, but the basic thesis is that the style of a "tomboy" is not as much about dressing androgynously as it is about "her inherent sense of confidence." That book, among a very edited collection of clothing in my first small shop, was instrumental in showing my new customers who I was, what I loved, and that confidence is the key to feeling great when you get dressed. It gave context to what I was making and selling. 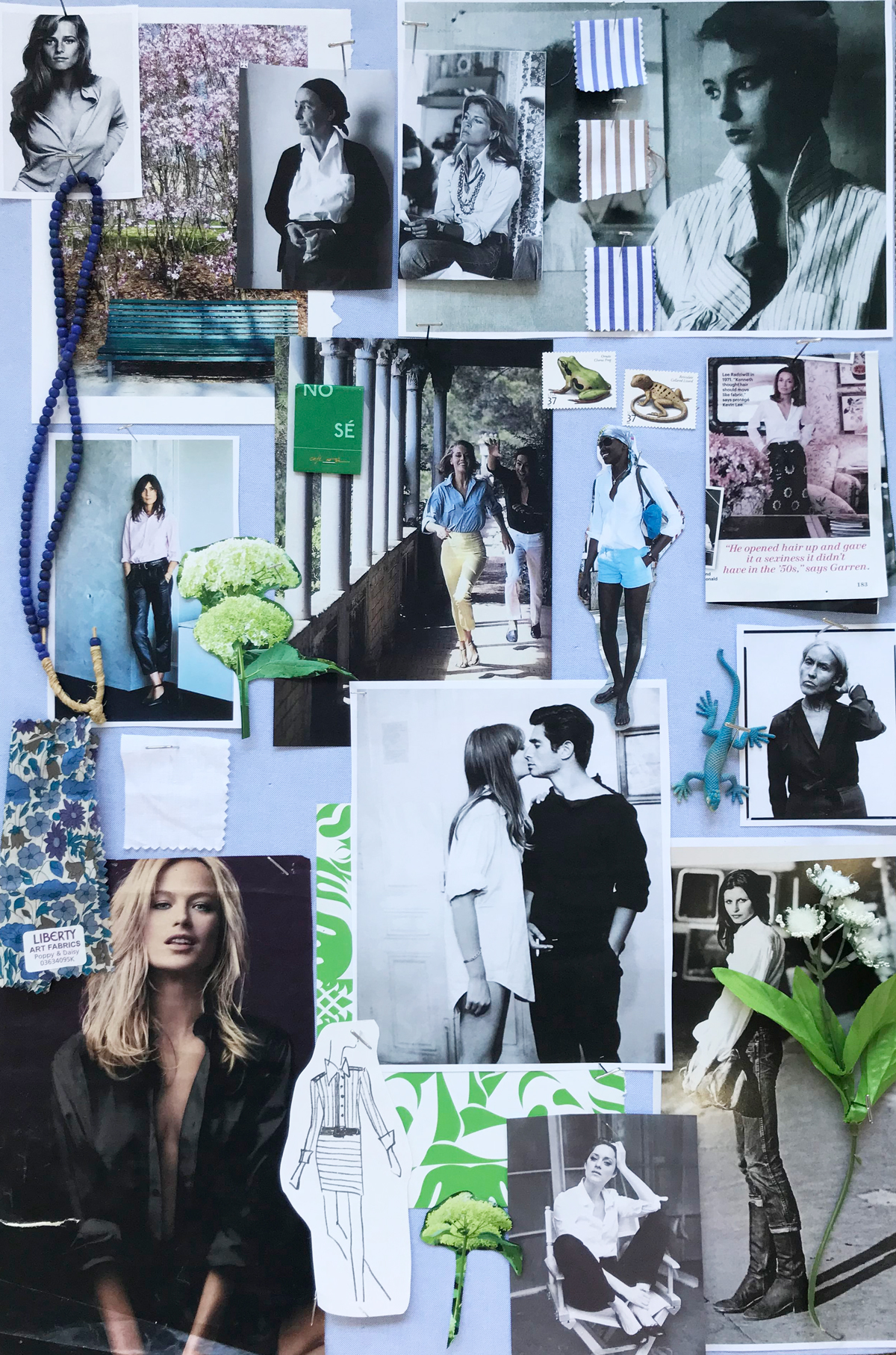 tomboy mood
Lizzie didn't mean that borrowing from a man's closet was borrowing confidence – or even that confidence was necessarily something that men have. I suppose it is more about wearing whatever the heck you want, and it's true that men have almost always been able to do that. Dressing for yourself… dressing to be able to move around the way you like. We use the word "unisexy" quite a lot around here – and I cannot explain it or go into the psychology of why, but for me, the juxtaposition of super-simple men's clothing on a woman is just so appealing. The contrast of it just makes me feel more feminine. One of my ultimate tomboy references is Kelly Hill. She was an intern at J.Crew when Sid was first working there in the 80s, and then became head stylist for Emily Cinader – the original tomboy – to define that J.Crew storyline that ended up in so many of our mailboxes and imaginations. I have rarely seen either one of these women in anything but jeans or proper trousers and a men's-style shirt. Makes things pretty easy, right? To me, they are both the picture of unisexy. Kelly and Emily are my second-favorite tomboys after my own Daisy and Harriet.
This is a long lead-in. Who knew there could be so many words to introduce one of the simplest things we make? But all of this sets up why the shirt I'm writing about today has been part of the lineup since the very first day we opened. There were a few other shirts hanging beside it in 2010, but the Boyfriend was – and is – still my very favorite. We named it because so many of the shirt's highlights are borrowed from a men's style. It has a slightly larger collar/cuffs than on our others… a front breast pocket… an old-fashioned gusset around the hem on the sides. One of my favorites is the LOCKER LOOP which comes from the 1960s, when Gant added a loop to the back yoke of their dress shirt so that you could hang it up in your locker – too skinny for a proper hanger – without wrinkling it.

But ours has some key differences that make it better than just ordering a men's shirt and calling it a day. It is trim through the body for a very slight hourglass shape. It's the idea of borrowing from a men's closet without all the extra fabric. (Although you could just as easily call it the Brother or the Cousin or the Uncle – any guy you'd inherit a cool shirt from!) It is even constructed beautifully, with French seams so that the inside is as fine as the outside. It is slim but long, so it is great for taller women who are constantly finding that their shirts ride up. If you are a leggings-wearer, it elevates those just as it goes with a pair of silk trousers for the evening. I love it tucked in, but it is fabulous worn out – the rounded hem makes it look intentional. The waist nips in, then skims over your hips and covers your bottom. This also makes it a fantastic swimsuit cover-up. Nothing chicer than skipping off to lunch at the pool, shirt tucked into a pareo, or even half-buttoned with just a bikini and sandals.

In my house, it is absolutely the MOST worn thing across all six women. When all of us were under one roof, hardly a day went by without at least one of them wearing a boyfriend shirt. Stripe – chambray – oxford cloth. It is comfortable enough to wear around the house or on the weekend, but "dressed" enough that you still feel polished when leaving the four walls and venturing out into the world. After awhile, it became sort of a punch line in the house because I'd say the same thing every time when they would ask what they should wear to XYZ. "Jeans and a boyfriend." Eyerolls might ensue, but they were smart enough to take the advice and come trotting down the stairs in one, looking effortlessly cool. Of course, being family and all, we are all within a size of each other – shaped quite differently, though not exactly a Dove Real Beauty ad. Still, 6 for 6, we ALL love this shirt. 3/5 in Boyfriends
Out of all of the shirts we make, this is the one that I steer people towards most often. When I walk into the shop and stay and chat for awhile, it is the one I pick up and say, wait, have you tried this one? It is amazing… unbutton it down to here and just see how you feel… And if it works, it works in many iterations – it is often bought in multiples. Since we have been running this same shirt for almost 11 years, I can identify the year by the fabric. Like the orange stripe pinpoint we made only once in 2010… or the indigo chambray that fades so incredibly. The lighter the blue, the earlier the vintage. In white poplin, it is elegant and refined… and the solid black and navy even more so. The stripes are preppier and more collegiate. A slightly newer fabric is the compact cotton – a really beefy, thicker fabric from Japan that is unbelievable and holds its shape so beautifully. Like an oxford cloth on steroids. The Liberty Fabrics are lighter-weight if heft is a trigger word for you – in tiny prints like those, it has a completely different feel to it. But it's always the same cut. Like a man's, but better. I can spot it from afar and recognize it in pictures and know instantly if someone is wearing it in the grocery store. Just yesterday, this comedian somehow came across my Instagram feed and I knew immediately that it was the black Boyfriend shirt she was wearing in her tour announcement. It must be working for her because it appears she's sold out most of her dates! She really does look great in it. In & Out
So the Boyfriend might not be the biggest thrill to purchase. It is understated… simple… not loud. The opposite of a novelty top. But let me tell you – it delivers, as every good go-to does. And even though you may already have a shirt for both weekday AND weekend, this one is an upgrade. It is the one me and my girls really live in, which is why it is the one I encourage women to invest in. You need one – or another one – or many – I promise.