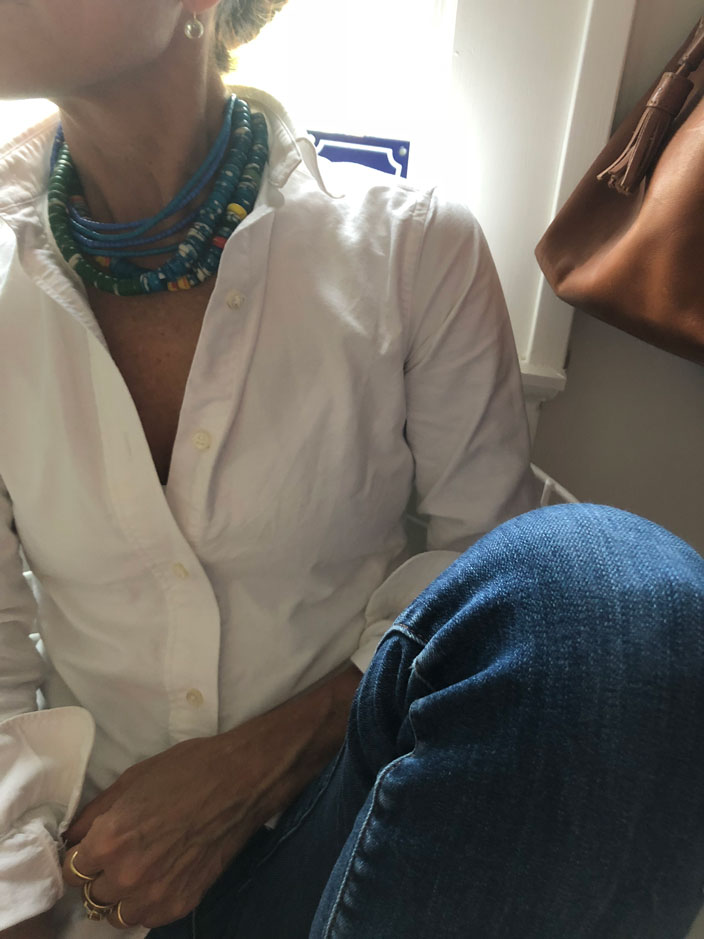 Piled on with my favorite white shirt

Since day one we've had African beads in the shop... lots of them. We call them "African" because the occasional batch will come from Mali or Togo or Kenya... but most of them are made in Ghana, which has such an amazing history of beads that they were actually once used as national currency...!! It is a third-generation family business for our vendor, who visits our office every few months with heavy plastic crates full of them. They smell of patchouli, each strand strung simply with raffia cord. He lays all the bundles out on the floor and it is such a feast of color and shapes that it's like I'm instantly transported straight to the outdoor market in Accra (no vaccination shots necessary.)

I love to wear them in multiples... they can take something simple and even preppy, and transform it into something personal and offbeat. You can layer them normally, but I like to shorten them into a choker and make them sit at my collarbone by folding them in half and tying a small ribbon around the back. (A trick I learned from my styling days... ribbon and leather cording was NEVER to be left out of the prop kit... along with smelling salts... but THAT is another story...) Just one strand doubled up is a bit refined, while piling on four or five can look excessive in a fun, glamorous sort of hippie way. They are especially great to take on trips, when I tend to pack and dress more simply and monochromatically. They aren't valuable enough to merit a trip into the hotel safe, or to worry that someone might nick them out of your checked bag. And they take up no room at all in the suitcase! I've worn them with a simple black sheath to a black-tie event... on the weekends with a graphic t-shirt... to the office with a crisp white shirt and trousers... blue jeans and a chambray... Now that I'm thinking about it, what haven't I worn them with? I will mix the colors in ways that feel a bit "off" – all brights, all blues, the big chunky ones that remind me of the pop beads that my girls played with when they were small...

I will share one other sentimental thing about these beads... the smaller ones especially. When I first met Sid, on the beach in Long Island in 1985, he was wearing beads with his swim trunks. I saw him from afar – and was worried they may be puka shells, yikes – but they turned out to be Mardi Gras beads. I cannot remember every detail, but his Mississippi accent in describing the provenance of those beads (as well as his ownership of his own provenance!) is all mixed up in my mind along with the color of the water and the way he ran along the sea wall. He still wears beads around his neck, but these are a couple of steps up from those plastic ones that I fell in love with (along with him) that day. And I even have a sweet picture of my dad wearing a strand on a boat in Wisconsin in 1972... the proud wearer of the fruits of my bored summer spent bead-stringing. So for me, they are unisex (though not for every man.) They may not pull as many strings in your head as they do for me, but they will always feel timeless and sentimental and a bit quirky to me.